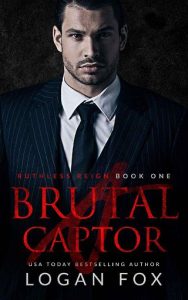 Betrayal. An everyday occurrence for a cartel princess.

But this feels worse. This feels…personal.
The man who protected me since I was a child is shot before my eyes, and my father orchestrated the whole thing.
The worst part? I’m then kidnapped by his killer.
Now my life is in the hands of a ruthless, hardened mercenary.
I’m terrified of the darkness behind his eyes, but drawn in by his tortured soul. Even though he’s damaged. Even though he wants more of me than I’m willing to give.
I could run, but I have nowhere to go. I need to find a place to call home, but instead I find… so much more.
Finn. Lars. Bailey. And Kane.
One bodyguard.
Two mercenaries who won’t let me out of their sight.
And the man who’s vowed to turn me over to the authorities — dead or alive.
I’d always hoped I’d fall in love.
But I’m not sure they’ll ever give me the choice.
They’ve made it clear that I belong to them now.

*A Brutal Captor is the first book in the dark cartel romance series, Ruthless Reign, where the heroine ends up with multiple love interests. This book is part of a series and ends on a cliffhanger. Contains triggers. Previously published under the titles Broken by the Monster, and Her Merc.