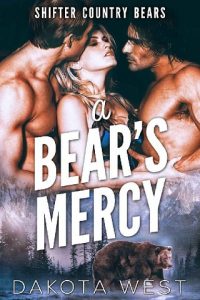 Charlotte “Charlie” Mullins doesn’t mind putting herself in danger. She’s actually volunteered to hunt down Kade Lessing, a feral alpha bear who might be attacking and killing wolf shifters in Cascadia. Charlie’s not scared of the big bad bear, though maybe she should be…
Kade Lessing isn’t really feral, though sometimes he wishes he were. God knows he’d be less tormented, and it would make things a little easier on him and his mate Daniel. When Kade hears a woman scream in the forest, he runs to the aid of a total stranger.
With one glance at the curvy, tomboyish girl left bleeding on the ground, he knows instantly that he’d do anything to save her – including fighting off the wolves who attacked her. When Kade carries her back to the cabin, Daniel feels exactly the same way.
They’ve saved her life, but can Charlie tell them the truth – that she was on a mission to take down Kade? Can their triad bond survive a battle between wolves, bears, and humans, or is their fated love doomed to fall apart?