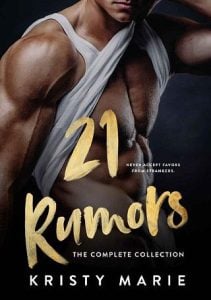 Never accept favors from strangers…
It’s a mantra every woman shouldn’t live by.
Because sometimes, those debts just might pay off in a happily ever after.
21 Rumors is a collection of three full-length standalone romantic comedy novels with crossover characters from each book.

Collection Includes:
IOU
Rumor has it she struck a deal with the bad boy.
It’s official.
I, Ainsley James, am crazy.
Desperate and crazy.
It’s the only explanation as to why I’m nauseous, standing outside Maverick Lexington’s door.
I mean, it’s possible the stories about his deck of playing cards—with the words IOU scrawled across the back—are just rumors of the ruthless quid pro quo deals he barters.
But the flutters in my stomach know better.
Maverick is as cold as they come.
But, I need one of those cards.
I NEED to owe Maverick Lexington a favor…

The Pretender (Previously Published as Subscriber Wars)
Rumor has it she struck a deal with the enemy.
Secrets.
Lies.
Betrayal.
Mine and Sebastian’s relationship wasn’t built on the foundation of trust.
It was built over war.
A ruthless war that exposed who we really were.
Enemies.
Imposters.
And Lovers.
Sebastian and I would never be friends—not after what we did.
But we could pretend—especially for the million-dollar prize—in a cutthroat film competition that would set our careers in motion.
We needed this win to fix our reputations.
But that’s not what happened.
They say money ruins relationships. I disagree.
Love is the ultimate destroyer.
Love ruined us.
Love made us pretenders.

The Closer
Rumor has it she struck a deal with her husband.
The tattoo down his forearm reads: My power is perfected in weakness.
It inspires bad decisions in everyone who crosses his path.
Not me though, I’ve made worse decisions before breakfast.
Marrying baseball phenom Cooper Lexington for his health insurance… doesn’t even rank Top 5.
But I can’t afford to lose this marriage by falling in love.
You see, I made a promise to myself—one I plan on keeping… even if it ruins us.