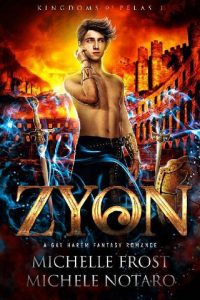 Venerit warriors fight for the honor of their master’s house, but will they fight to defend an innocent among them?

Kidnapped and offered up as a prize for the three Venerit champions of the kingdom, Theon is terrified and out of his depth. He’s only human and completely at the mercy of the towering Venerit warriors he’s now forced to share a cell with.

Mage lords rule the land, but will Theon allow fear to rule his heart?
Navigating the politics of House Natas and the budding relationship between himself and the champions, Theon discovers enemies lurking around every corner. He’s coming to realize that even though the Venerits hold prestige and honor, they’re just as much slaves to their master as he is. With all of them at the mercy of their Lord, he knows that his champions might not be able to protect him from every threat.

Will the secrets Theon’s kept tear apart everything he’s fought so hard to claim as his own?