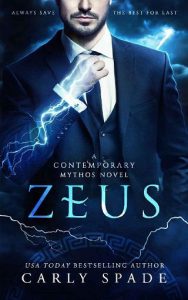 A god-king disguised as a criminal defense lawyer…
Zeus/Zane, King of the Greek gods, holds the world in his palm in both his mortal and godly form… until Hera leaves him, forcing him to uphold Gaea’s clause: There must always be a Queen, or he loses his title and part of his power along with it. Time is short. Too bad the one woman he has his sights on wants nothing to do with him. Or does she?

An empath criminal prosecutor…
There’s nothing Keira Bazin dislikes more than defense lawyers. So when she discovers Zane Vronti, one of New York’s finest, has been brought in on her newest murder case, it’s anything but good news. Tensions flare as the two immediately butt heads, but there’s something about Zane she can’t put her finger on. His emotions are the strongest she’s ever felt–borderline overwhelming. Power. Lust. Command. Can she fight her growing attraction for him? Does she want to?