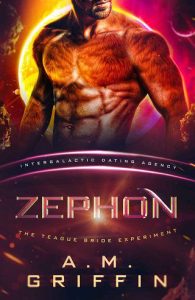 The Yatur sent a spaceship to Earth with a seemingly simple exchange. They would provide humans with advancements in technology for medical and scientific purposes, and the only thing humans had to give in return were women.

Getting on the spaceship to the faraway planet Teague is Angie Love’s one chance to escape her abusive husband and save her unborn child. There’s one catch though—single women can apply. Fortunately for Angie, her twin sister has already been accepted into the program and no one’s ever been able to tell them apart. Now she only needs to take her sister’s place and fool the officials.

When the alien mate selected for her discovers the switch, Angie wonders if he’ll reveal her secret or accept the feelings growing between them and love her anyway.

Zephon Brarcil has waited his entire life for his human mate. He’s dreamed of someone who’ll love him and fill the void his distant mother has left. When the female arrives, she’s more than he could have ever dreamed. When her secrets and lies become known, Zephon decides to protect her and her child with all the resources at his disposal.