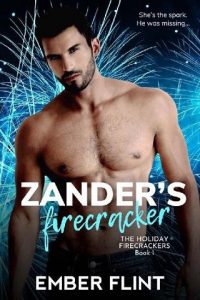 34-year-old, Strait-laced, straight-faced Zander Markos is a lawyer who never cracks a smile if he can help it, and as one of the heirs to the ubiquitous and all-powerful Markos Inc’s empire, no one could argue with him if he’d say he has no time to even think of having fun, let alone actually do such a mundane thing.
In light of all of this, it remains a mystery why his brother thought it would be a good idea to put him —a no-nonsense, micromanaging, security freak— in charge of overseeing the preparations for the company’s July 4th retreat and beach party at their estate on Lake Tahoe, and yet here he is, neck-deep in organizing funny family-friendly activities within an inch of their lives, until there’s no fun left whatsoever in them.

Of course, any Independence Day party worth its name’s got to have a firework display and the Markos must have only the best and therein lies the problem, because ‘the best’ is not what Zander expected.
24-year-old Alexandra ‘Alexa’ Tinley may be short compared to most kids, let alone adults, but she’s tough and a spitfire through and through. She’s been ‘one of the boys’ all of her life and still has the mouth and scrapping abilities to prove it.
She could not tidy a room if her life depended on it because she’s in constant motion and wherever she goes, disorder rules, but when it comes to her art no one could say she’s not the absolute best.

A man and a woman can’t get any more different than these two: he’s order, she’s chaos, he’s ice, she’s fire, he’s Scotch neat and she’s… nitroglycerine, and yet they can’t look away; the explosion is inevitable.
This little voluptuous nuclear firecracker might have ‘handle-with-care’ written all over her, but she’s still the spark he was missing and he’s the tether she didn’t know she needed.