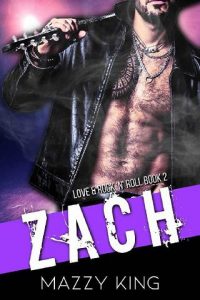 Zach’s rough upbringing has made excellent fodder for his music, but sometimes the past is too hard to escape, especially when it’s in the form of a broken family and the alcoholic older brother he’s always had to care for.

When his band returns from a global tour to play a homecoming show in San Francisco to celebrate their debut album going platinum, Zach meets Stacey, a journalist from the popular local music blog, who wants to film a documentary about the band as they prepare for their big hometown concert. That means she’ll be getting into Zach’s personal life…and his family drama.

Something about Stacey makes him unable to turn her down, though. Apart from being gorgeous, she’s brilliant and funny and real in a way industry people just aren’t. And when she witnesses a terrible fight between Zach and his brother, she doesn’t run.

But when his brother’s troubles follow them to the arena and Stacey’s caught in the crossfire, is the rock star life–or more accurately, Zach’s family’s life–too much for her to handle? Will she be one more person he loves that slips through his fingers?