Home
contemporary romance
You Ruined Me by Isabel Jordan (ePUB) 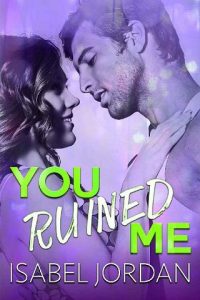 It’s possible to escape the friend-zone and graduate from fake boyfriend to real one, right? Asking for a friend.

Michael Montgomery had a plan. He intended to get so drunk he forgot his ex-fiancé was marrying his cousin, and that he had to attend the wedding. Alone. But somewhere between the vodka and organic bananas at the supermarket, he forgot the plan and ended up rescuing a damsel in distress–by pretending to be her boyfriend. Oh, well…planning was overrated, anyway.
Delilah Morgenstern didn’t need someone to save her from her ex, but she wasn’t going to refuse the help, either. Being Michael’s fake girlfriend at the wedding was the least she could do to repay her sexy nerd in shining armor. Falling for him, though? Not an option. But surely she could fake it for one night (sharing one bed) and not get too attached. That’s what she keeps telling herself, at least…
It’s not long before Michael and Delilah realize how thin the line between real and pretend is–and just how easy, fun, and potentially ruinous it would be to cross it…