Home
contemporary romance
You Dropped a Blonde On Me by Dakota Cassidy (ePUB, PDF, Downloads) 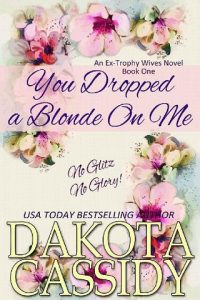 From pampered to pauper…

Maxine Cambridge, former high school beauty queen turned trophy wife, has officially been traded in for a newer, younger model. From a mini-mansion to her mother’s eight hundred square foot retirement village, Maxine and her teenage son Connor are left with nothing and life is looking pretty bleak for this one-time rich girl.
Maxine hasn’t worked in twenty years at being anything more than her very rich, very-soon-to-be-ex-husband’s eye candy and a stay-at-home-mom. She doesn’t know the first thing about making a livable income, but she’s going to find out as she scoops poop and hosts bingo night at her mother’s village.
In the midst of fighting her mad insecurities, getting her footing while wearing her mother’s hand me downs, and desperately looking for a way to support herself and her son, in walks Campbell Barker–former high school classmate–a one-time geek turned total smoke show.
Campbell gives her glimpses of who she used to be before she became someone’s dress up doll. Before she lived in a world that revolved around someone else’s opinion of her and he refuses to believe she’s no longer the vivacious, smart girl he once had a major crush on.
But the harder she fights the notion that the old Max is gone, the more she finds herself again and now she’s ready to take back what was once hers and fight for her new life!