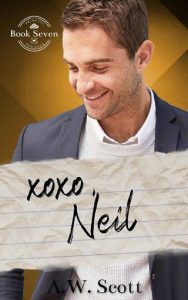 His greatest wish is for two men to love him…

Neil knew that most people wouldn’t understand the burning desire inside of him. They wouldn’t be able to see why he’d stayed single for so long with only a sliver of hope that he’d ever find what he wished for. But when two men suddenly become interested, he discovers the road to happiness is harder than he expected.
Oscar has loved his best friend for as long as he can remember. It’s been a fight to keep himself in the friend-zone while watching the other man date. He knew they were both dominant types, but he had hope that there was another way. When an adorable professor walks in one night and steals both his and Keller’s attention, he realizes that three is definitely not a crowd.
Keller’s life was dedicated to helping others while remaining aloof. When an injury makes his distant nature near impossible, he finds himself relying on Oscar to help get him back on his feet. It wouldn’t be so bad if he weren’t fighting attraction to his best friend. And things get even more confusing when he meets Neil, the sweet professor who captivates both he and Oscar.
Can Keller accept that he’s attracted to both men equally? Will Oscar be able to control his need to lay pipe every chance he gets the two men in the same room? Does Neil have what it takes to balance two relationships like he’s always wanted?