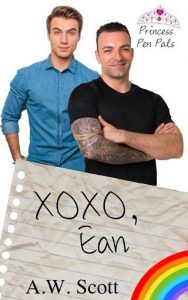 He needs a place to lay low…

Ean Garner is Hollywood’s hottest leading man. With a career that others would kill for, he seems to be living the life. Except he’s not. Ean’s been living a lie for a long time, and he’s finally taken off the mask to show the world his true self.
Of course, nothing is ever that easy, right? Instead of feeling liberated, he gets berated and told to change back. Frustrated and alone, Ean does the one thing he thinks will help… He runs.

Rhett lives life in his own bubble of happiness. He’s got his station at his tattoo shop, the ranch he inherited, and a great set of friends. Deciding to help the newest bunch out with a project leads him into a situation he never expected.
When Ean Garner, his ultimate celebrity crush and someone half his age, shows up in town needing a place to lay low, he jumps at the chance to help. He may never have a shot with the newly outed Little, but he wants to be around him as much as he can.

A gruff, older Daddy who thinks he doesn’t stand a chance. An (occasionally) bratty Little on the run from his old life. Together, they find their own version of happiness.