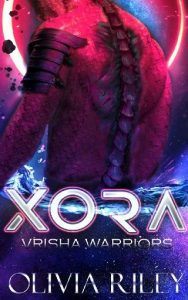 As if there weren’t enough monsters in the deep, now Grace has to work beside one

Beneath the surface of Oceanus, Grace Monrow spends her days in an underwater city working within the rigs, cleaning and maintaining machines, hoping the place doesn’t flood and drown her in her sleep. All she wants is to make enough credits to get off the cold watery world for good and make a life somewhere far away, where she doesn’t have to see another tentacled monstrosity or worry about creepy, deep-sea pirates ever again.
Unfortunately, she’s at the whim of her job. As long as she keeps out of trouble, Grace is confident she’ll make it out unscathed.
But then a vrisha comes to the city and mucks everything up, forcing workers out of their substation to fulfill some secret mission. Rumors about them are enough to scare even the bravest in the city, but the company needs a volunteer to maintain the building. And Grace is the lucky chosen. Pirates are now the least of her worries as the vicious and deadly alien becomes her new workmate.
Twisted horns, red eyes, dark fangs. When she encounters the real-life space devil, she’s a little freaked, to say the least. She also comes to find him arrogant, impatient, and stubborn. Yet, oddly mesmerizing. Her curiosity might get the better of her, and the vrisha could be the kind of trouble she’s been trying to avoid. She knows full well he has no interest in humans, yet he’s willing to be near her, even to talk. His weirdly intense stare makes her wonder what he’s really thinking.
Working with him could be dangerous.
Xora is committed to atoning for his past offense. When he has a chance to return home and regain his warrior rank, he takes on a mission that might restore the life he once had.
Too bad the mission calls for him to journey to a world run mostly by humans, a race he feels indifferent to at best and despises at worst. His hope is to finish the task quickly and get off the miserable planet as fast as possible. At least the humans are too afraid to work near him.
Except for one. A human woman. Startling as that is. She is insistent, mouthy, and too bold for her own good. Yet he finds her presence not entirely unpleasant. Somehow she’s captured his attention, as baffling as that seems. But with her help, she could be his best chance at returning home.