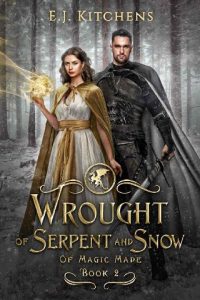 Wrought of Serpent and Snow (Of Magic Made #2) by E.J. Kitchens – Free eBooks Download

A quest for a guard. A curse for a princess. A love for them both.

Half-magic Athdar Owain loves his new home in Giliosthay—and the crown princess he’s betrothed to. But when he learns his mother and grandfather are alive, slaves to the raven-eaters in the Mountains of Terror, he sets out for a deadly land he’d hoped never to see again. Even if Athdar and his companions, including fellow Silver Guards Galen and Bane, survive the journey, he fears they may not be able to free his family from the magic of the raven-eaters’ enslavement.
Princess Thea of Giliosthay and her sisters may no longer be forced to dance with dragons each night, but they aren’t free from their curses. Prince Cerav has disappeared, taking with him the miniature, magic-wrought crystal city and glass castle they need to free themselves and their kingdom from his influence, but to follow him would be foolish until they know how to fight the mysterious abilities of the half-magics. Ever practical, Thea focuses her efforts on strengthening her Realm Walking abilities and on deciding how she feels about the young Silver Guard her father has betrothed her to.
While Athdar is struggling to rescue his family, strange attacks begin in Giliosthay. Athdar once chose Giliosthay as his home and helped save it; now, he’s inadvertently split the Silver Guard and left Giliosthay vulnerable.