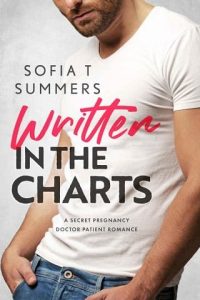 Evan could have been the one.
Head over heels, I was ready to bet it all on him, on us,
But he shipped off overseas without ever hearing my truth.

Years later, he comes to me hurting in more ways than one.
He shouldn’t be anything more than a patient at the practice.
This military man isn’t the boy I once adored,
But medical charts don’t explain away the temptation.

We’re taking a second chance,
Risking my residency for a few rendezvous.
We’re charting the stars which led us here,
Trying to find where it all went wrong.

Thanks to the stories left untold,
Our crossed paths lead to crossed wires for a second time,
But I won’t risk my love again without a reward.
He won’t slip away from me so easily.

Evan will have to know about my once-broken heart…
My pregnancy…
Everything.

Get ready for an adventure of a lifetime as these completely off-limits, forbidden doctors take you on an unexpected romantic ride. Loads of drama, action, heart and heat. And the Sofie promise of the most satisfying hea ever.