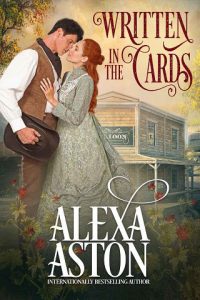 An independent woman discovering herself as she travels through the American West.
A man of integrity broken by events in his past—and on the run from a bloodthirsty killer.
Two individuals drawn together who find a love that can never be . . .

Maggie Rutherford jilts her too-perfect society groom at the altar and flees New York for the American West, where she turns her travels into dime novels that she writes and illustrates under the pen name Lud Madison.
After the Civil War, veteran Ben Morgan marries his childhood sweetheart and takes her to homestead on the Great Plains. Losing her and their unborn child in an Indian attack, Ben detaches from emotion and becomes a roaming gambler. When he kills a cheating opponent in self-defense, the man’s gunslinger brother swears revenge upon Ben.
Ben hides on a cattle drive and brings in a herd to Abilene, where a waiting Maggie wants to find a rough and tumble cowboy to interview for her next story idea. Sparks fly as the dangerous drover and popular novelist wind up living in the same household, running a general store east of Abilene. But with Black Tex Lonnegan hot on his trail, will Ben run from his growing attraction to Maggie and the gunfighter’s promise of death—or will he make a stand for his life—and love?

*This is a revised edition of Written in the Cards, which was originally released under the pen name Lauren Linwood.