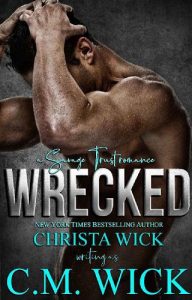 MARIE: It’s been six years since I got my baby brother and sister out of the hellhole of abuse we grew up in. Six years spent looking over my shoulder, wondering if we’d ever truly escape our father’s wrath. Everything I did back then, I did to keep them alive. And now that a violent criminal from our past has found us, I’m forced again to use the skills I never asked to be good at. It’s bad enough I end up getting caught in the crime by a man as ruthless as my sister’s captor. But needing—and wanting—to trust him? That’s completely unchartered territory for me.

LUKE: It’s been a while since I’ve caught someone stealing from me—I’m just not the kind of man people make that mistake with often. Hell, if I’d been able to take my eyes off of her that night, she would’ve gotten away with it, too; she’s that good. And yeah, this mess she’s in is bad enough I don’t fault her actions. Still, letting her go is out of the question. I know she thinks I’m as dangerous as they come, and in some ways I am. Given how protective I’m starting to feel about her, dangerous doesn’t even begin to describe the lengths I’ll go to keep her safe.