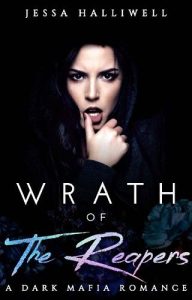 When you accidentally set your whole world on fire, sometimes it’s easier to just let it burn.

The Reapers were always supposed to be the villains in my story.
They were the four ruthless brothers who ruled our city with an obscene amount of cash and more blood on their hands than the most vicious killers.
When I first showed up on their doorstep, I was a toy.
A shiny new object for the big bad wolves in designer suits to play with.
They could use and abuse me as much as they wanted, and I knew no one would step in to stop them.
I was nothing to them.
That is, until I became everything.
Atlas, Ezra, Tristan, and Cyrus fell for me.Hard.
And against my better judgement, I fell for them too.
What we had didn’t make sense, but in a lot of ways, it didn’t need to.
We had each other and that’s all that really mattered.
But with a high like that, we should’ve known we’d come crashing down sooner or later.
With a flick of a match, everything we built together went up in flames.
I tried so hard to salvage what I could from the ashes,
but with more questions than answers from the men I thought I knew,
I didn’t know who to turn to, let alone who to trust.
I fucked up and the worst part is, I have no one to blame but myself for whats happened.
I burned every single bridge I’ve ever built and now, not even the most dangerous men in this city can save me.
Every villain has an origin story and this is mine.