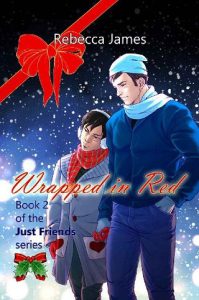 Wrapped in Red is a sweet, slow-burn, friends-to-lovers MM romance with college-aged characters and no explicit content.

At Christmas, anything seems possible.
University student Duri Jeong has been hopelessly in love with his friend Mac since they were freshman. Unfortunately, the handsome football quarterback is never without a girlfriend. Well, except for every year around Thanksgiving when, like clockwork, Mac breaks up with whatever girl he’s dating and remains single through the New Year. Duri knows he’s the wrong gender for Mac, but that doesn’t stop his heart from dreaming, especially around the holidays. However, even after a wonderful summer spent with Mac at his home in Nags Head, Duri can’t ignore the girlfriend issue. And he’s only got one Christmas left to make Mac see him as more than a friend.

Every November, Mac Murdock breaks up with his girlfriend at the time to avoid the romance and pressure of the holidays. He finds the festivities are more fun spent with his group of friends, especially cute and affectionate Duri. At the end of junior year, when Mac finds out that Duri has nowhere to go for the summer, he brings him home with him; and, unexpectedly, their friendship solidifies into something Mac has never had before–and doesn’t fully understand. As fall drifts into winter and Duri begins spending time with other guys, Mac has to question the feelings of jealousy stirring within him. Thinking it might clear up his confusion, Mac asks Duri to go with him to the Christmas party. He isn’t prepared for the version of his shy little friend the night presents him with.