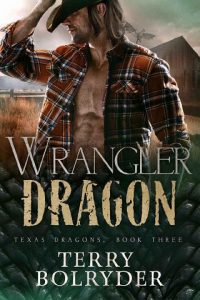 Save a horse, ride a wrangler dragon…

Tucker C. Thompson, an immortal dragon and legendary gunslinger, is now a simple wrangler who enjoys life on the ranch under his middle name, Clancy. The world has moved on and he’s happy to be forgotten. That is, until he sees his old Dragon’s Talon coin in an antique’s shop in a tiny town. He wants to buy it back from the feisty, curvy redheaded shopkeeper, but she’s not selling. Turns out, she’s obsessed with the legend of who Clancy used to be. But after Clancy shows up in time to save her from danger, she accepts his proposition: come to Dragonclaw Ranch, and get a real Tucker Thompson experience with one of his descendants. The only problem? His inner monster, who seems to think this interesting woman should be his.

Billie Belladonna Palmer has one dream: to make a Tucker Thompson museum to make sure her favorite gunslinger isn’t forgotten. So even when the handsomest man she’s ever seen shows up, bearing a slight resemblance to Tucker’s wanted posters, she isn’t going to give up her prized coin. But then the emerald-eyed man offers something she can’t pass up, and soon enough she finds herself on Dragonclaw Ranch, riding horses and getting shooting lessons from a descendent of the legend himself. But before long, she can’t help getting closer to sexy, mysterious Clancy. And thinking that maybe the real treasure is time with him, in his arms and his heart.

As the two enjoy a wild west adventure, men with bad intentions are searching for Clancy’s coin. The past Clancy ran to the west to escape is also catching up to him, with dangerous effects. Clancy and Billie will have to learn to rely on each other and open their hearts to more than they ever imagined, if they want to survive an encounter with something far worse than even a titanic basilisk.