Home
contemporary romance
Worth Waiting For by Tilly Tennant (ePUB) 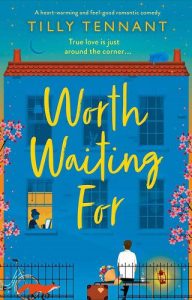 Worth Waiting For by Tilly Tennant – Free eBooks Download

On an ordinary, grey day a little bit of magic is about to happen on a street corner near you…

Ellie Newton’s life revolves around telling other people’s stories. As a journalist for the Millrise Echo, she’s always a phone call away from the latest goings-on in her hometown. But school fundraisers and shopping trolley thefts have started to feel slightly, dare she say it, boring. Until she hears about a story that definitely has something special.

Ben was heartbroken when his girlfriend Gemma walked out on him without a word. But rather than mope around the house and eat his body weight in cookie-dough ice cream, he’s decided to do something about it. This calls for a grand gesture, and a bunch of flowers just isn’t going to cut it. Ben has set up camp on the street outside Gemma’s house and is determined to stay there until she explains why she left and offers him a chance to fix things.

The story has everything Ellie loves – local interest, romance, a rather handsome man – and she decides to do everything she can to help Ben win Gemma back. But as Ellie and Ben join forces to reunite him with the girl of his dreams, could their story lead them somewhere more unexpected, after all?

Previously published as The Man Who Can’t Be Moved.