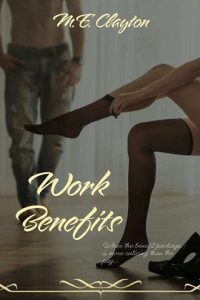 Who’s better at friends-with-benefits, men or women?
Depends on the man and the woman.

Skylar
If anyone were to ask Skylar McKay, she’d say that life was good. She had a great family, satisfying job, and enough friends, but not too many. The only thing that was missing was a steady man in her life, but she didn’t really consider that a negative, no matter what her sister claimed. Skylar wasn’t in a rush to find her soulmate, and she had absolutely nothing against your random one-night stand.

So, feeling satisfied and content in life, Skylar is just going about her regular business when she’s approached with a proposition that she’s sure has got to be a joke. I mean, it’s not every day that a hot, sexy, brooding, tatted-up mechanic with rough hands offers to be your friends-with-benefits. However, it becomes a battle of the sexes when Landen Rush insists that women are the ones that complicate sex.

Landen
If anyone were to ask Landen Rush, he’d say that he had no complaints in life. He’d been raised by wonderful parents, he was close to his brother, he liked his job, and he had plenty of friends. The man didn’t even have any complaints where women were concerned. Granted, he never kept them around long enough for any complaints to arise, but still. Life was good, and he planned to keep it that way.

So, feeling satisfied and content in life, Landen surprises himself after he’s lured into a conversation about friends-with-benefits. Determined to represent single men everywhere to the best of his ability, he throws down a challenge to his sexy coworker, even knowing that it’s a mistake. However, all bets are off when Skylar McKay takes him up on his proposition, determined to prove him wrong.

When friends-with-benefits takes a different turn…
Knowing herself the way that she does, Skylar is confident that she can have a sex-only relationship, leaving her feelings at home. Still, when she gets a first look at what Landen Rush is working with, it might be harder than she thinks not to fall in love with…uh, certain parts of him.

Knowing himself the way that he does, Landen has no worries about being able to keep his feelings from getting in the way of what is sure to be an explosive sexual relationship. Still, when he finds out that Skylar McKay is the complete opposite of a shy wallflower in bed, everything changes.

Determined to keep their feelings out of it, Landen and Skylar do their best to reign supreme when it comes to their friends-with-benefits arrangement. However, there’s a clear loser when jealousy starts to rear its ugly head, causing them to have to re-evaluate their little arrangement.

NOTE: This book contains adult language, adult situations, explicit sexual encounters, tattooed mechanics, a very sexually confident heroine, a lot of inappropriate workplace rendezvous, and some workplace banter that is very frowned upon these days. If sensitive to any of the aforementioned issues, please do not purchase.