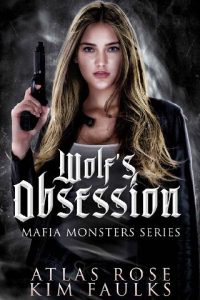 Chaos ruled my life.
Dark, foul…malevolent.
I thought my battles were over. Thought I was finally part of the pack.

But that Unseelie curse in my chest has other ideas.
She wants the Wolves for herself…and she’ll force me to do the unthinkable.
Betray the Vampires.
Now Crown City’s Immortal Mafia Clans are divided.
Wolves against Vampires.
The Fae trapped in the middle.
And the FBI is hunting all of us down.
But there is a new enemy in the shadows. A darker, more powerful beast who’s out for blood and Phantom faces a predator like he’s never battled before.
There is no more running now, no more pleading.
No more deals to be done. There is nothing but standing up to be counted…and fight like never before.