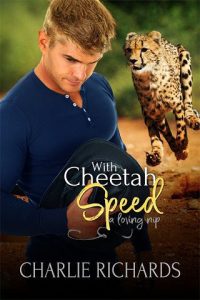 Just a little Love Bite: A cheetah shifter walks into a honky-tonk bar to do reconnaissance on members of a cougar shifter pride… and runs into the biggest distraction of his life—his mate.
As the head enforcer for the Shifter Council, Mycroft Portent doesn’t usually do field work. Except, with Fate blessing those under him with finding mates and taking unexpected leave, he finds himself shorthanded. When a report of a shifter alpha shirking his duties to his pride comes across his desk, he decides to head to Texas himself, taking fellow enforcer Dakota Drudeson with him.
Tailing several members of the pride’s inner circle leads Mycroft to a backwater honky-tonk bar. He and Dakota head inside, intending to watch their behavior. Mycroft firmly believes that the way a shifter treats a species weaker than himself is very telling of their home life.
Mycroft doesn’t even make it to the bar before the scent of his mate hits his senses, distracting him. Unable to help himself, he leaves the reconnaissance to Dakota in order to track down the other half of his soul. To his surprise, Mycroft realizes his special someone is a vampire—Boyd Johnson. While the timing is terrible, Mycroft trusts in Fate’s plan. Can he figure out how to complete his mission while giving Boyd the time and attention they need to forge their bond?