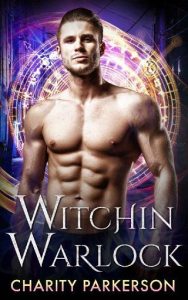 Caspian comes from a long line of witches. Brock is third generation F.B.I. They shouldn’t fit but they do.

A year ago, Caspian moved to a small town in Ohio. He hoped the lack of competition in the area would be good for his psychic business, Futures Untold. The last thing he expected was a sexy F.B.I. agent to show up and treat him like a missing person’s bloodhound. Even though Caspian keeps doing favors for Special Agent Brock Wray, his distrust of authority runs deep. After all, they used to drown witches in this area back in the day, and Caspian has no desire to end up on Brock’s missing persons’ list.
Officially, no one knows how Brock keeps solving so many huge cases. Caspian is Brock’s secret weapon. The man knows things no one should. That’s not why Brock keeps showing up and making excuses to see Caspian. Caspian fascinates Brock. Not only does Brock’s inner detective need to know how Caspian knows so much, but Caspian is also smoking hot. He is the single most gorgeous man to step foot in their tiny town in ages. Brock isn’t dumb. He has to take Caspian off the market as quickly as possible and he’ll use any excuse to get close enough to do it.
When Brock takes Caspian along for the ride on a case, things will get weird. Let’s hope Caspian isn’t forced to show why he’s the most witchin warlock around or Brock might run for the hills.