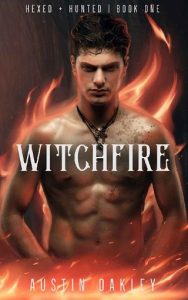 A small town boy. A dark stranger. And secrets that no one was supposed to uncover.

When cattle begin to turn up dead on the family farm, twenty four year-old Landon Winfield assumes it’s the usual culprits. But along with the string of mysterious deaths that threaten him and his mother’s struggling farm, the arrival of a handsome newcomer with strange tattoos brings Landon face to face — or more like face to frothy mouthed muzzle —with the real predator that stalks the forests of Rock Creek.
A werewolf.
Yeah, those exist. And apparently, so do people that hunt them. Crazy, right?
The shocking revelations continue as the attractive hunter Rousseau reveals that Landon is a witch and has the power to summon fire at his fingertips. But his hands aren’t the only thing that heats up as he and the hunter work closely together to rid the small town of its werewolf problem and Landon finds himself falling for the knife-wielding stranger from Texas.
As they get closer, so does the angry beast that’s stalking them and Landon must embrace his newfound power if he hopes to save the farm, his family, and the hunter that holds his heart.