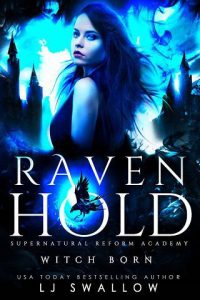 Last week I accidentally and publicly raised the dead. Now I’m the only necromancer at Ravenhold reform academy.

Ravenhold detains dangerous juvenile offenders on a remote Scottish island, where their magic is useless and escape impossible. I’m told I’ll leave after rehabilitation, but nobody will tell me how or when.
Dorian Blackwood rules over the vampires, shifters and witches in the academy’s halls. As the only vampire-witch hybrid in existence, he has unparalleled supernatural abilities and few people dare confront the cruel and charming savage.

But the academy’s two other powerful hybrids want him deposed—Zeke the dominant shifter whose laidback manner hides a vicious streak, and the silent and secretive Ethan who nobody dares touch. As the new hybrid at the academy, I’m dragged straight into the middle of their power struggle.
Even though I’m drawn to the three guys, I want to keep away from academy violence and politics. I make a plan to keep my head down, attend the classes, and hope for an early release. I don’t want anybody to discover my secret: I’m the trinity witch.

But something sinister runs through the academy underbelly as students go insane or disappear without a trace. When I’m made a sickening offer, I discover exactly how sinister.
To survive Ravenhold’s corruption, I’ll need to make a deal with three hybrids who have the ability to either help or kill me.