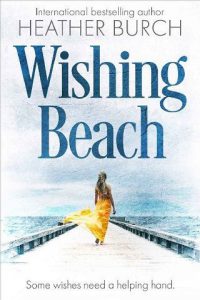 Her world is shattered, but a poignant love story from the past gives her the will to love again in this feel good must read from Amazon’s #1 bestselling author of One Lavender Ribbon and In the Light of the Garden.
After a painful divorce from a narcissist, Angela Reed-Baker has taken up residence on the famous Wishing Beach Island, a destination known for granted wishes beneath the mysterious Banyan tree near her beachfront estate.

Just as Angela begins to settle in, her life takes an unlikely turn when she discovers a tattered photograph of a young woman among her groundskeeper’s belongings.
Intrigued, she asks him about the picture. With time weathered fingers and an underlying sadness in his eyes, he slips the photo from Angela and admits the girl was, “The One.”
When he refuses to reveal more, Angela digs into his past. What happened to the young woman he loved? And why does there seem to be a judicial cover-up shrouding the story of the two star-crossed lovers, a cover-up that may reach all the way to the Florida Senate.

But Angela’s journey is also one of self-reinvention as she navigates life free from the bonds of her controlling ex-husband. With her handsome neighbor and new friend, mystery novelist Ryan North by her side, Angela embarks on a voyage of discovery but the trail quickly runs cold until she’s whisked away to the romantic streets of Paris, France. She realizes the bonds of love shared by her groundskeeper and the young woman run as deep as the brooding Atlantic Ocean.

Along with that love are dark secrets, long hidden, but with the power to threaten life as she knows it.