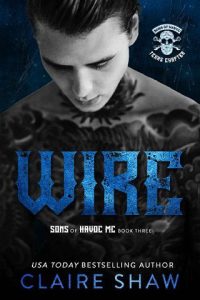 I’ve stared down the barrel of death, and in doing so, I’ve never been the same.

Wire
I’ve been through a lot of shit in my life. It’s part of being in the club, really. Only, I was taken a short time ago and during my time with the club’s enemy; I was fucked with mentally and physically. The physical stuff didn’t bother me, but to this day, the mental stuff weighs heavily on my mind.
I didn’t let my brothers know about what happened, but how could I? They’d never look at me the same.
Time has kept passing by, but time hasn’t helped calm the demons in my mind. Eventually, I started acting out in a way that the club didn’t like, and now I’m a Nomad.
Maybe I should’ve told them about what happened, but the last thing I wanted was for them to look at me any differently. I’d rather die with my secret then live in a life filled with shame.

Tallulah
My life has never been exciting, or at least it wasn’t until the day I watched a man intentionally ride his motorcycle into a ravine. I could hardly believe what I was seeing, but quickly jumped into action.
Thankfully, he was still okay when I found him. He obviously wasn’t from around here and while his injuries were minimal, I made them seem like they were a big deal. He was obviously struggling with something and all I wanted to do was help. He looked like he had a lot on his mind and I know firsthand how dangerous that can be.
Through his time on my farm, we develop a friendship that turns into something more. We talk, and we listen to one another. I start caring about Wire and make him see the errors of his ways. I take him back to the place he once called home, but what happens when I realize that home isn’t a place for me anymore? It’s a person.