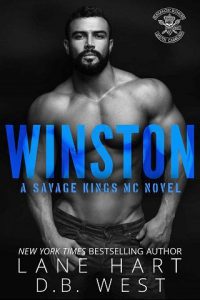 Winston Prescott has been a grumpy SOB for the past ten years. None of his brothers in the Savage Kings MC knew why, not until the day one of them made the mistake of posting a sexy centerfold on the wall of the clubhouse.

The gorgeous model posing topless on sports cars and motorcycles isn’t just any girl. Her name is Zoe Donahue, and she also happens to be Winston’s stepsister.

While the two haven’t spoken since the day Winston reluctantly let Zoe go so that she could pursue her dreams, an explosive reunion is on the horizon.

Zoe’s been holding a grudge against Winston for how things ended the day she left. While she’s home for a week, her plan is to torture her brooding stepbrother by wearing as few clothes as possible while promising Winston that she’ll never let him touch her again.

Winston will do anything it takes to earn Zoe’s forgiveness. And this time around, he isn’t going to let her leave without putting up a fight.