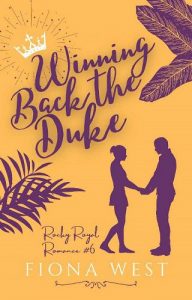 A boy from the docks stands no chance with a princess, right?

If Rhododendron Broward could immunize herself against the inconvenient attraction she feels toward her brother’s best friend, she would’ve done it years ago. Even though she’s a doctor and researcher, she’s never found a cure for his charm. Thankfully, being a princess, she’s been able to keep him at arms’ length…until he volunteered as security for her expedition.

Lieutenant Arron James just found out that he’s the next Duke of Greenmeadow Downs, and suddenly, everything he’s known about himself is in question. Well, not everything–he’s still in love with Rhodie Broward, just like he has been for years. And now he has three months by her side to see if he can convince her to give him a shot…without the dukedom tipping the scales.

When Rhodie pulls rank on Arron, she finds the tables turned. Apologies aren’t enough for her boyfriend’s bruised heart and ego. Can she find the guts and grace to convince Arron to give her another chance?

Content warning: This book contains the depiction of disordered eating, miscarriage, and a parent with cancer. It was previously published under the title The Semi-Royal.