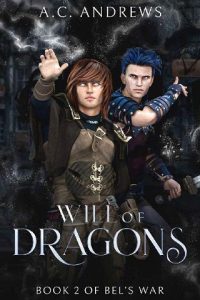 The world is broken.

The new civil war has cracked the empire apart as Turi and Rio race to gather allies against Clan Ishima’s brutality. The enemy is ten steps ahead, and Turi is pushed to his limit to stop the evil a corrupted paladin order has unleashed.
Demari, finally fulfilling a lifelong dream at sea with his brother, finds himself recruited into the designs of a goddess and soul-bound to a man he barely knows. In the fight for supremacy in the empire’s waters, Demari’s newfound power and connection will alter the course of the war and change his life forever.
Meanwhile, back on Trosika the new empress, Sarina Marias, faces betrayal, ancient magic, and intrigue as Ishima agents make their next move to control the island. When fate brings her face to face with the God of War, can she match her will to his?