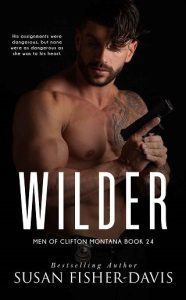 When livestock agent Wilder Richards is called in on a case for rustling, the last thing he expects to find is that Rory Heston is a beautiful woman. He’s instantly attracted, but he’s there to do a job. Once he convinces her to hire him to work undercover on her farm, he realizes his mistake. It’s too hard concentrating on his job when all he can think about is her.
Rory Heston is past mad about her dairy cows being stolen. When the Montana Department of Livestock sends an agent, she has a hard time thinking about her cows anytime Agent Richards is near. It was bad enough just talking with him, but now he’s convinced her to hire him so he can check into her employees. Rory knows none of her men would steal from her, but she lets Wilder do what he can to catch the rustlers.
They can’t stay away from each other, but Rory tells Wilder she can’t be with him until he solves the case, and Wilder wants to do that as quickly as possible. He knows he’s falling for her, but once he arrests who’s behind it, will she still want to be with him?