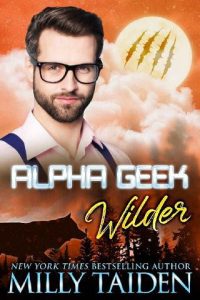 Jackie hides a tragic past under her professional, tough girl exterior. Nobody gets in, so nobody can hurt her. Until she’s assigned to rescue trust fund baby geek Wilder from a shadowy group which may have connections to her own history. She shouldn’t want the client, but her body has other ideas.
Wilder can’t believe Jackie is sent to protect him. He definitely doesn’t mind that such a beautiful woman is willing to spend time with him. Not to mention she seems to like him. A lot. How can that ever be a bad thing with someone he wants? Okay, so she could kill him in bed, if others don’t get to him first.
Jackie sees how brilliant, brave, and selfless Wilder is. He’s the polar opposite of most of the men Jackie’s known. She can’t fight her attraction to him, and he’s clearly into her, but a long term love seems out of the question. Until a serum makes him so much more than just a cute geek.