Home
Historical Romance
Wicked with Him by Heather Boyd (ePUB) 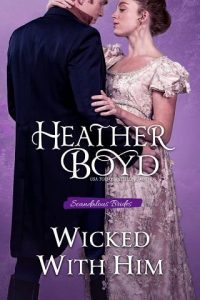 Scandals rarely take place in the center of the ballroom, but on the fringes anything is possible.

From the moment George Sweet stole his intended, Roman Crawford has pursued every possible manner of revenge against the nasty scrub. Though he does have his limits. Debauching Sweet’s sister, a veritable paragon of vestal goodness, is beyond the pale—yet that is exactly what the lady herself requests. Roman isn’t willing or able to refuse when Amity Sweet quite literally begs him to participate in her ruin. But instead of a shy, virtuous flower, Roman finds himself in the arms of a wickedly passionate beauty…who disappears from Town immediately after their tryst.
If public humiliation is the only way Amity can escape an arranged marriage to one of her vicious brother’s cronies, then it will be on her terms. She enlists the aid of George’s greatest enemy, who she’s certain will be happy to see her brother brought low by her corruption. But Amity is no fool. She also chose Roman because of his reputation in the bedroom. She expects to find pleasure in her ruin. She does not, however, expect to find Roman Crawford nigh unforgettable.
When the pair meet again, their wicked attraction is stronger still, but Amity despairs of falling for a man pining for another, while Roman knows any offer for her hand may further alienate Amity from her family. Neither are aware that their worries may be for naught. That their combined fate—and destiny—may already be sealed.