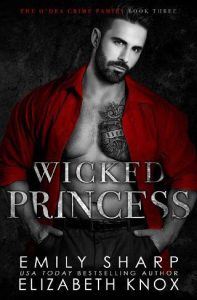 She wanted to kill me and I wanted her in my bed, but first impressions aren’t everything.
Callum
The two of us had been played and we figured it out very quickly. I wanted Marrin because of what he did to my sister, and I didn’t yet know why Siobhan wanted him. From the blood that was covering her skin she wanted him to suffer as much as I did, so we worked together.

It wasn’t long before I discovered Marrin violated her the same way he did to my baby sister. He fully admitted it to me. He bragged like the sick bastard he was. He told me in explicit detail how she cried, and how he made everyone close to her think she was insane. It infuriated me enough to the point where I almost killed him. Almost. I couldn’t take Siobhan’s vengeance, not when this man had already taken so much already.

The two of us completed a horrendous act, but the man deserved it. What we did together bonded us in more ways than one and before long we were sharing a bed. Siobhan was misunderstood by most, but I understood every part of her. Whether it was the good or the bad didn’t matter. She had my respect and my heart. I assumed we could make it through anything, though the moment I found out her last name I knew there would be a problem.

She’s Siobhan O’Dea, Irish mafia royalty. The fact she was born into a criminal family wasn’t the problem. It was because she was Irish and an O’Dea. I was a MacDougall, and our father’s loathed each other. Still, I’d fight for her because I wanted to taste her on my lips until the day I died. Siobhan was worth starting a war for, and I’d do just that.