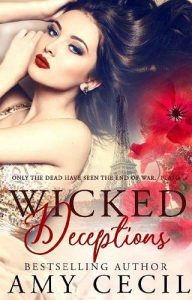 Only the dead have seen the end of war ◆ Plato
As members of the Romanov family, Katerina and her brother have no choice but to flee from the Russian Revolution targeting them. While Saint Petersburg is ripped apart by the claws of war, their only hope of survival is to leave the country.
Thrust into the clutches of hardship and loss, Katerina thought things couldn’t get worse. How wrong she was. When her brother is murdered, she has no choice but to turn to prostitution to keep food on the table and a roof over her head.
Fortunately for her, an opportunity presents itself in the form of a handsome German officer with a compelling offer – the return to a life of security and comforts, in exchange for secrets. The idea of working as a spy for the German government is thrilling, yet the dangers are brutally real. As Americans join the war efforts, Katerina is faced with the choice of risking everything… knowing the cost could be her life.