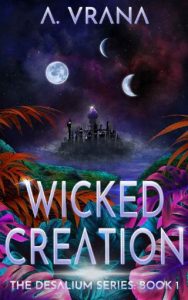 Wicked Creation (The Desalium #1) by A. Vrana – Free eBooks Download

Doctor Leilani Kāne is no stranger to death. Earth became uninhabitable many decades ago and now the human race is living on Mars, fighting to keep from going extinct. In a last-ditch effort to find a new planet to call home, she is assigned to a station on one they call Cerebrius 207. However, this new planet is deadlier than any she’s ever seen before. In the four years she’s been there she’s lost hundreds of lives, but her superiors won’t listen to reason and give up on a planet that seems insistent on killing them. With dwindling resources and a sickness plaguing the humans from an indigenous plant, she has no choice but to continue to save the lives she can.

That is, until one fateful night…
When she goes to investigate a mysterious sound coming from the clinic, there’s nothing there except some footprints that don’t look human. Next thing she knows, she’s somewhere she doesn’t recognize and thrown into a confusing world of aliens she never knew existed. Faced with the idea of being true mates to not just one, but four of them, she has to decide whether to go back to her human life, or stay and learn to live among strangers with new rules she doesn’t ever plan to obey.

This is a stand-alone series. Each book will have a new coupling.
Book One is a Why-Choose MMFMM.