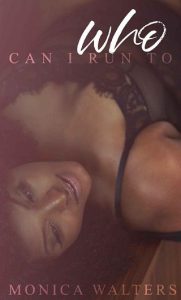 Who Can I Run To by Monica Walters – Free eBooks Download

When tragedy strikes, it hits hard, and Chantrice Leonard is still reeling from its blow. Life just isn’t the same, and she’s doing her best to rid her spirit of the grief she feels by submerging herself in work. She believes that as long as she keeps busy, she won’t have to deal with the loss she’s suffering. However, a family dinner, in which she meets a man that was impacted by her loss as well, forces her to face it head on.

Being an overcomer is just part of who Orion Gentry is. Positivity pours from him on a daily basis, but it doesn’t mean that his life is without struggles. Having a severe medical crisis takes a toll on him mentally and physically but he doesn’t stop trying to be the best version of himself. While there are weak moments, he maintains his focus on a positive outcome. But when he meets a woman directly connected to his lifeline, he falls immediately and knows that his struggles have not been in vain.

Chantrice and Orion meet and sparks fly, but the premise on which this meeting occurs makes Chantrice feel as though she wants to attach herself to him for the wrong reasons. Orion refuses to give up on her and allow his destiny to willingly walk out of his life. Will Chantrice stop overthinking and just go with the flow, or will she allow her reservations to control her heart?