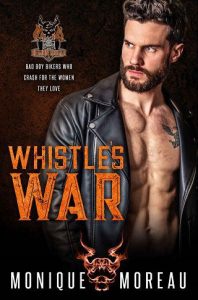 A Mafia princess on the run.
A Bratva prince turned biker.
Will their love start a war?

On the run from an arranged marriage, Tasa thought she’s found the perfect hide-out. After all, her eldest brother and head of her mafia family would never think to search for her in a club full of rough bikers. With her newfound freedom, the first thing on Tasa’s bucket list is to lose her virginity. The perfect specimen comes in the shape of a sexy biker with coal black hair and stunning turquoise eyes.

It’s just her rotten luck to have chosen a man with a possessive streak a mile wide.

After escaping from his Russian Bratva family, Whistle became the resident fuck-up of the Demon Squad MC. For years, he’s tested his brothers’ loyalty with his drunken antics and brawls. Finally ready to grow up, he’ll prove he’s turned a new leaf by taking over the Squad Bar. What he doesn’t expect is for the stutter in his heart when he lays eyes on their newest waitress and her sultry curves. While Tasa may have the kind of sexiness a man would lay his life down for, nothing prepares him for the innocence he discovers right beneath the surface.

As a former denizen of the shadowy mafia underworld, he knows that virgins like her came with rules.

Rule number one: If you break her, you keep her.

Whistle is more than ready to do right by Tasa, if only she played by the rules and did what she’s told. Instead, the little wild cat battles him tooth and nail her hard-fought independence. But as her brother zeroes in on her, what starts out as a fight for her love turns into a war to protect the woman he loves.

Will Tasa stop and stand by the man she loves or will she keep on running?