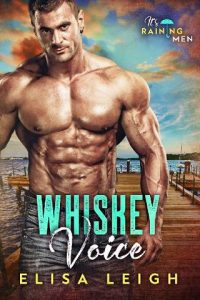 Orson Steele owns The Deck, a beach bar popular on the boardwalk for it’s good music and relaxing atmosphere. He’s weathered and worn, just like the seaglass he collects on the beach, from years of living the goodlife with his buddies. He’s never been serious about a woman and assumes he’ll be a lifelong bachelor, that is until he sees her from across his bar. She’s the first woman to stir something inside him in years. There’s something about her that calls to him, but then he sees she’s wearing a bar t-shirt and holding a notepad taking orders. Not only is she entirely too young for him, she’s also his new employee his manager hired when he was out of town. Will he be able to stay away from her like he knows he should? Does he want to?

Isla Rae is new to Spring, Florida. She moved here less than a month ago escaping a past she’d rather forget. What she needs now is time to breathe and get her life in order. Then she meets the owner at her new job and she doesn’t know how to feel about the brute of a man or her choice of town that’s filled with more men than women. Orson seems like a great guy to everyone, but her. With her he’s the ultimate grump and she’s had her fair share of horrible men in her life. She doesn’t need another. Except, she’s drawn to him. Curious about the man with a whiskey voice and a gorgeous smile. Will she give this man a chance to prove her wrong? Will she open her heart to something that could be the very thing that saves her?