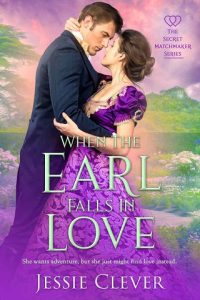 As a confirmed wallflower, Lady Audrey D’Arcy dreams of the day she’ll officially be on the shelf and out from under society’s, and her mother’s, critical eye. But when she encounters a handsome stranger in a cloakroom, her dreams for the future are suddenly not so clear.
Dashiell Evers, the Earl of Amberley, has lived a life meant for his dead brother. So when he encounters a bold wallflower in the dark confines of a cloakroom, he knows he’s found the one person who is meant for him and only him.
But when she refuses his attentions, the two strike a bargain instead. He will not pursue courtship with her if she will allow him to teach her the freedoms afforded a spinster.
Except what neither of them bargain for is love.