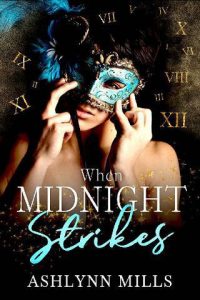 This book was previously published under my old name but has since been updated with an added epilogue.

After a horrendous accident that leaves Danny burned and disfigured, he loses everything that means anything to him.
Ostracized and alone, he leaves home and moves to a small town with the hopes of starting over. Despite a new shot at life, Danny’s confidence is shattered and when a tempting new neighbor moves in, Danny can’t do more than quietly watch him— unable to utter a single word.
The magic of New Year’s Eve has other plans though, and Danny gets a night of sexy recklessness at a masquerade party.
After the night in the arms of a sexy stranger, Danny goes about his life thinking he can at least enjoy the memories if his one-night stand. Until he finds out that the stranger who rocked his world is the same sultry and captivating neighbor he’s been crushing on for a long time.
As Cole and Danny actually start to build a relationship, Danny has to decide if he comes clean about the night of passion they had without either of them knowing, only . . . he’s terrified Cole may not care for him the same.
In the end, all Danny wants is for Cole to want him for who he really is and not the man he pretended to be in the mask.