Home
contemporary romance
When Fate Was Forbidden by A Amaro (ePUB) 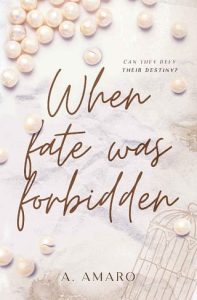 When Fate Was Forbidden by A Amaro – Free eBooks Download

“We were forbidden in the stars, never meant to be but you know what they say about fate… you can either submit to it or rewrite it”
They were never meant to be. Wrong for each other from the very start – the bad boy and the good girl, but destiny had other ideas.
He was reckless like the sea, but she became his anchor.
She was held back by traditions, but he became her liberation.
But fate was forbidden, and they were torn apart by the people closest to them.
Lies
Secrets
And
Betrayals
9 years later, destiny decides to play with the soul mates one more time, bringing them close enough to feel but forbidden to touch. Their new lives woven together by unbreakable threads.
The drowning boy
And the girl gasping for air.
They were one soul torn apart, incomplete without the other, until they defied destiny and rewrote their own fate.