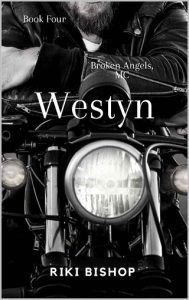 Brighton Borders is the only daughter of the Mayor. She’s also been the butt of everyone’s fat jokes. Especially in high school. She’s only got a few more weeks left of her senior year and is more than ready to graduate. Being nineteen and a senior isn’t why she gets bullied. No, she gets bullied because she’s overweight. It wasn’t as bad when her brother was in school, but that all changed when he graduated two years ago. She has had a constant in her boyfriend, or so she thought. No matter what her family does, she still has her self-doubt. Especially after everything hits the fan in her personal life.

Westyn is the President of the Broken Angels, MC. It’s not an easy task, but he loves the club and his brothers. He looks around and he sees his brothers settling down and couldn’t be happier, but it does make him want the same thing. However, not just any woman will do. She has to be strong and able to handle being a Queen. When he runs into the Mayors daughter, his life changes. He sees her strength, but she doesn’t. Just because she’s not what society calls ‘skinny’ she thinks she’s just as good as scum on a shoe. He plans to show her the opposite and she will be his.