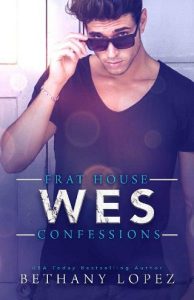 She wants more than just his forgiveness…

Trixie’s not ashamed of the exposé she wrote for the college newspaper last year. She’s a woman who knows what she wants and isn’t afraid to do whatever it takes to get the story, even if it meant lying to a friend to get the inside scoop.
Still, every time she sees Wes, she regrets the loss of someone she really enjoyed spending time with. Not one for labels, or someone who puts limitations on attraction, Trixie can’t deny the pull she feels toward Wes when they cross paths again.
He’s willing to do whatever it takes to change her perception of him…
Wes has always been the odd man out. Different than his brothers, he was always more comfortable playing video games or enjoying solitary moments in the pool.
Although he never expected someone as sexy as Trixie to fall for an inexperienced guy like him, he also never expected her betrayal. Now that he has a second chance, can he get her to see him as more than the nice guy she duped?
A year has passed, but anger and regret still linger. Can Wes and Trixie agree to put the past behind them and move forward, or will late night confessions prove to be more than they can forgive and forget?