Home
contemporary romance
We All Fall Down by Liberty Parker (ePUB) 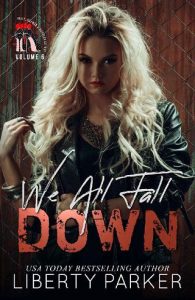 Sable is following her father’s lead
To be the most feared assassin and make others bleed
But Daddy Reedus knocks her down, causing harm and making him frown
Now it’s up to Kieran to mend her heart, despite their rather bumpy start
The day Kieran rescues Sable from the viciousness of her father, he falls into
a lifestyle different than what he’s used to since she’s become sought after as
a mercenary for hire. She’s never needed a man to save her; however, his touch sets off something she needs and he becomes her everything.
Living on the lam isn’t easy, especially with her father and his cronies trying to
crush her.