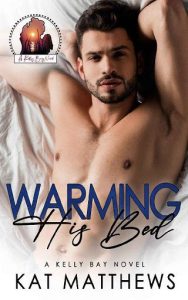 For nosy tabloid blogger Sadie Davis, it’s the work trip from hell. Instead of an inviting BnB host, she’s faced with a broody, reclusive ex-firefighter who wants to kick her off his porch.
Drew Evans values his solitude more than anything. So when a captivating stranger shows up at his front door with nowhere else to turn, his gut reaction is hell no—not my problem.
She got scammed, but not by him.
Unfortunately, every hotel in a 90-mile radius is booked up and Drew’s conscience won’t let him leave Sadie stranded in the middle of the night in an ice storm.
Only problem is, Sadie isn’t gone the next day. Or the one after that. And the longer she stays, the harder it gets to say goodbye.
But Sadie’s itching to dig up the past. A past Drew plans to keep buried deep.
Sadie might be rekindling a spark he thought he extinguished years ago, but it could come at the cost of truth – a truth that could destroy Drew’s entire identity.
Can Sadie and Drew let go of the past enough to hold on to each other, or will they both end up getting burned?