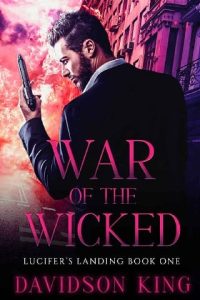 Lucifer’s Landing is full of unscrupulous people: five families desperate to own every inch. For years, under the watchful and most powerful eye, there has been peace. With the murder of the most powerful man, it’s as if the gates of Hell have opened.
Dante Scavo is trying to fill his father’s shoes, find the person responsible for killing him, and stop Lucifer’s Landing from becoming a war zone. He has to focus, find out who the traitor among his ranks is, and end them. The last thing he needs is a distraction, but when he meets Rainn, one look, one touch, takes his breath away.
Rainn Blessings is no stranger to strong and powerful men. His life is about survival and getting to a place where he finds his peace, though sometimes that means being the fantasy of others. Working as a high-class escort he’s seen a lot…done a lot…and not much surprises him. Then Dante walks into The Magic Mirror and turns his world upside down.
With an unlikely ally, Rainn and Dante try to survive the storm, but no one is bulletproof or untouchable in the game of violent delights. Getting out unscathed is impossible; the question is: will they get out alive?