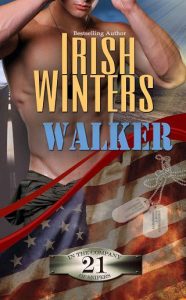 Former US Navy SEAL Walker Judge has nowhere to turn.
He’s a wanted man, a convicted murderer on the FBI’s ten most wanted list. The Hague wants him for war crimes committed in Jordan. England wants him for acts of terrorism against their queen. His unseen enemy has relentlessly produced enough false evidence to make Walker a pariah the world over. He’s not only taken Walker’s SEAL team, but his flag and his future. Walker has only come back to Florida to kiss America goodbye…

Junior Agent Persia Coltrane is falling apart.
In Florida for a much needed R&R, she’s besieged by nightmares that won’t end. Her nightly glass of whiskey no longer numbs the memories from her last infil into South America. She can’t eat, sleep, or focus. Until a breathtakingly beautiful man staggers out of the surf and drops to his knees on her beach. She can certainly focus then. Especially when he tips forward and reverently kisses the wet, packed sand. He didn’t just swim all the way from Cuba, did he?
That’s over a hundred miles…